Get Your Ass Out of the Friend Zone! 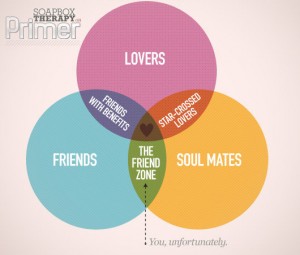 Before we take this any further, let’s take a look at what it means to BE in the friend zone, according to the top definition on Urban Dictionary: What you attain after you fail to impress a woman you’re attracted to. Usually initiated by the woman saying, “You’re such a good friend”. Usually associated with long days of suffering and watching your love interest hop from one bad relationship to another. Verb tense is “Friend-ed”.

Yeah, I’d say that sums it up, mabye not exactly, but close enough to get the point.

We’ve all been in some variation of this same exchange. You meet a girl who is just the right type for you (at the time), things go well, you exchange contact info. Spend the next few weeks chatting back and forth, have an occasional coffee. Then, when you go in for that first romantic kiss or mention how you feel about them, you get completely shut down for any of the following reasons:

“Can we just be friends?”

“I am not ready for a relationship right now.”

“I just got out of a bad relationship.”

“I’m moving out of the city and don’t want to get too attached right now.”

Whatever the reason they give you, it’s always means the same thing. You have now been relegated to the Friend Zone. Now, it CAN be possible to get out of it, but it’s never guaranteed. If she never liked you to begin with and doesn’t find you attractive, odds are, you ain’t moving. If you’ve got a girl who has tossed you into the friend zone, there are some ways that you can tell if she really just wants friendship, or if mabye she IS interested, but now just isn’t the right time for her. Once you decode the behavior to figure out which is which, you can decide from there where YOU want the relationship to go.

Keep in mind that a lot of the reasons for being Friend Zoned are due to lack of attraction, so you may never get out of the zone. There’s also a lot of extenuating circumstances for why someone may not want to have a relationship, so don’t take my words as gospel. (Unless you want to be a pimp, that is! :D) Things may never end up changing, but ultimately, it’ll benefit you in the long run. Consider it a lesson learned, and don’t make the same mistakes in the future.

Remember: You’ll only be stuck in the friend zone if you choose not to move forward.