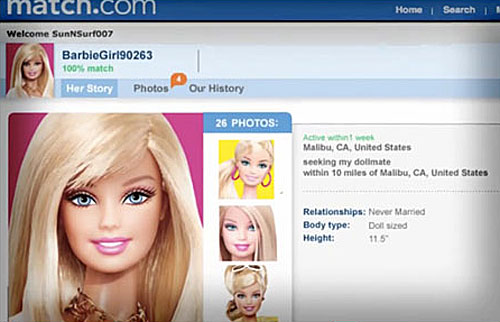 Personally, I have never been catfished. But it happened to my former roommate Danny a few years back, before the movie or tv show had come out. I am not going to name the dating site that he used, simply because I don’t feel that the site had any fault in the situation, and I wouldn’t want to bring any negative attention to them that isn’t warranted. So for the sake of anonymity, we will refer to the site as 123Date.com.

So. Danny had been on 123Date.com for about 3 months with no luck, when he was messaged by this one girl, with the screen name “PurfctlyPurty.” Now, I would have turned her away simply at the horrid bastardization of the English language in her s.n., but that’s just me. She was a little chubbier, but had a gorgeous face, and seemed to have a great personality. (Or so Danny claimed).

Over the next 2 months, every time I turned around, Danny was using our desktop pc to chat with her, leaving me with a shitty HP laptop and an even-shittier internet connection. He seemed happy, if not a little isolated from the rest of the world. His desktop pic became a collage of images of Alicia, or so she claimed her name was. Summarizing the situation to speed up the story: they talked for at least 2 hours a day, by phone or online chatting. Never with a webcam though.

Towards the 2 month mark, he said they were making plans to meet up, but she begged off the first 3 attempts to meet up. Finally after 3 weeks of trying to plan she explains that she has a very overprotective older brother who wanted to meet him first and make sure he wasn’t crazy. Immediately, this put up a red flag for me…why does her brother need to meet him? I decided to use my Google-fu and look into this further. I started with her Facebook page, which seemed pretty legit at the time, about 50 friends, and Facebook was still fairly new at that point. She had her brother listed as a friend, and he looked legitimately creepy.

I tell Danny, the only way he was meeting this guy was if I was with him, and if Alicia comes too. We all agree to meet for coffee the next day the next town over, as it was a nice middleground from their town and ours.

Lo and behold,no Alicia because apparently she was too sick to meet. She was well enough to text Danny to tell him Alex was about a block away, however and make no mention of her not coming.

Alex was without a doubt, the weirdest dude I have ever met in my LIFE. and obese. And reeking of body odor and cheetos. The worst part was that after the first 15 minutes of us meeting, he stopped talking about his sister completely, and focused on asking Danny questions about himself, the types of women hes dated, what does he look for in a personality. Then he asks if Danny has ever dated men, and the wheels begin to turn in my head. He explains this away by saying that ‘Alicia’ had her heartbroken by a boy last year who told her the reason it wouldn’t work was because he was in love with another guy.

At this point, I subtly ask Danny to borrow his phone, claiming mine is dead and I needed to text my girlfriend quickly. I find Alicia’s phone number in his phone and hit send.

If you guessed Alex’s cell phone was ringing, you are CORRECT!

When I confronted him by holding up Danny’s phone, he became flustered and tried to come up with a reasonable explanation, but Danny wasn’t having it. To his credit, any hurt feelings he may have had were well-hidden, and he simply told Alex that behaving this way is a cruel thing to do to innocent people and that if he’s trying to find someone to love him, he needs to do so by being himself, not a fake sister.

Danny definitely handled the situation better than I would have, by being calm and giving Alex sound advice, he was more likely to listen to reason, as opposed to someone screaming at him.

Alex sent Danny an email a week later apologizing for hurting him and saying that Danny’s reaction help him to realize what he was doing, and that he was now using his own profile pictures and personality to join online dating sites.

Danny never replied, but we checked the site and sure enough, Alex had a profile that had been updated less than a day ago.

Have you ever had this happen to you? Mabye you should take a peek at my Catfish-spotting tips.