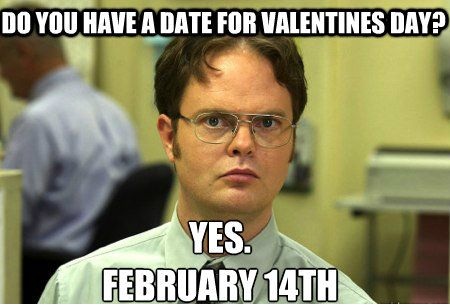 I’ve had many, many MANY blind dates. Hell, meeting in person from an Online Dating Site is still kind of like a blind date, because you only know the persona that they have put out online. There are certain times that you should not schedule your first date, and holidays are definitely in that group. Especially one.

I had been telling my friend Mandy that the girls I had been meeting on one dating site (which shall remain nameless), had been total letdowns. They all initially start off with some great email contact, but it seemed like the transition from internet to phone and then face to face hadn’t gone well. I, of course went to my best gal friend for some manly support.

Justin: “Maybe my voice and looks and personality clash, mabye these girls just expect something different based on my profiles.”

Mandy: “Or mabye you could not be such a jerk, for one. For another, women don’t like being drunk dialed by guys they barely know.”

Mandy: “By getting out and meeting them?”

Justin: “Too difficult. Don’t you have any friends who’d love to be seen on the arm of a hot guy for an evening? I’ll take her to a swanky dinner right downtown. I know a guy at that restaurant Kstew and that sparkly dude went to last time they were in town!”

Mandy: “Justin, I wouldnt set you up with my worst…hmmm…..I DO have a coworker….who wont shut up about being lonely.”

I’m paraphrasing, but basically, she had a sweet, nice looking coworker who wouldn’t shut up about being lonely at the holiday. Of course, with it being end of January, I am assuming she meant Christmas. So we talk back and forth for a few nights, and decide to meet. I tell her I’m out of town for two weeks (really only one, but I want her to squirm), and she suggests the Saturday I return for the date. I hang up and immediately dial my buddy who is the assistant sous chef at the restaurant I mentioned above and begin to beg for a two top for that particular night, figuring it should be fine, given how far in advance it is.

When my buddy erupts in uncontrollable fits of laughter, I realize what that Saturday is: Valentine’s Day.

I manage to plead with him to work his magic on the hostess so that when we arrive that night, we can at least get a crappy table by the bathrooms. He says he will try his best, which is really all I can expect at this point. Most men would call to other restaurants as a backup plan, right?

So the day arrives, and I head to pick her up. She sounds cheery as she buzzes me in, but when I get to her door, her face falls. Well, actually her face looked like it was already melting like an hours-lit candle, but I am pretty sure she looked disappointed. I cheerily asked if she was ready, hoping that regardless of her face, if she’s got a decent personality, mabye we can still hook up at the end of the night. Every girl wants to get laid for Valentines Day, right?

We get to the restaurant, and while I am a little bit embarrassed to be seen with a girl in late-1990′s era chunky heels, glittery turtleneck and camel-coloured pants, I figure it’s so crowded no one else will care either. The hostess can’t seem to find my name. Date looks at me with utter disgust. Hostess suggests we wait in the bar while she tries to find us room.

Two hours and 5 drinks later (all mine, all double shots), and we still haven’t been seated. I drag my stumbling self to the hostess stand and proceed to stare deeply into the hostess’ cleavage while asking when our table will be ready. She looks up in mock horror and I realize; she forgot about us. She put us in the bar figuring we’d either get hosed or pissed off and leave. By this point I am getting angry and the date is about as red as the roses that were sold to every other woman in the resto except her.

I wont say what happened after for legal reasons, but suffice it to say we ended up at the McDonald’s around the corner because every other restaurant wouldn’t take us. I puked on the floor, she cried out of embarassment and the fact that I ruined her shoes.

I advised her that it’s probably time to buy a new pair anyways, so she should thank me, to which she replied in disgust that I didn’t even have the nerve to bring her a gift for Valentine’s Day. I replied that after seeing what she looked like, I’m, glad McDonald’s was the most expensive purchase of the night.

I did buy her dessert for Valentine’s Day though: one of those yummy McPies. 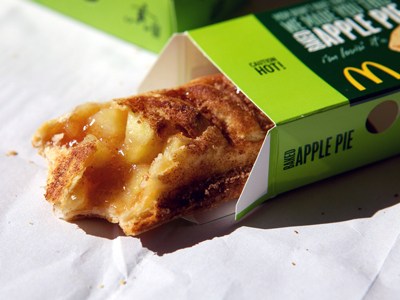 At least now she doesn’t complain to my friend about being so lonely and needing a date.

And this is also why I will never, EVER forget when Valentine’s Day is. To avoid it.