Don’t Get the Clap.

I know, you’re probably laughing already. You are thinking, holy shit, why would Justin share something like that with the entire world?

Well, for one thing, besides being amusing to laugh at other’s misfortunes, I told you yesterday why you should always get tested regularly. Now I’m going to explain why I do. And why I tell all of my partners when my last one was.

I also want to make it clear that I am in no way some amazing player who always does the right thing and gets the girl. I fuck up. A lot. But I like to think I learn from my mistakes (see Valentine’s Blind Date), and if I can prevent others from making the same one too, then why not subject myself to a bit of embarrassment.

Besides, I did NOT see this coming at all…..

Seriously. I can even remember the last time that I ever heard any mention of this STD prior to this incident. It was in that movie where Reese Witherchin‘s ex worked in the nightclub for creepy Austin Powers: 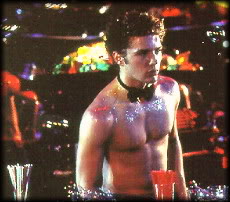 LOVE the glitter, by the way. But I digress..

**DISCLAIMER*Just because I personally hadn’t had heard anything about Gonorrhea at that point in my life, doesn’t mean it hadn’t still been rampant. I am in no way minimizing the severity of this disease.**

For those uninitiated, here is a definition of Gonorrhea, from the CDC.

Curious as to what it looks like? Go here.

Why is it called The Clap? Read this.

So I have been chatting with this one girl on an online dating site for a couple of weeks. She sends increasingly flirty messages, I reciprocate.

Then I make the most stupid online dating mistake ever. She adds me to Facebook.

Shit. I knew as soon as it was done that I was probably making a mistake, but I did it anyways.

So we continue chatting back and forth on FB while she’s out of town for work. I also notice the high number of flirty wall posts from others, but let it slide, I like to keep my options open too, you know. We decide to meet up in a week for a ‘movie date,’ wink wink, nudge nudge.

The day of, I am getting myself ready when I get a Facebook friend request from some guy, and the only mutual friend we have is her. Suspicious, but intrigued, I add him back. Within minutes, I get a message from him asking how I know her, which puts me on the defensive immediately. I ask him why he wants to know, and he replies that he met her on an online dating site and had a brief relationship with her. By this time, I am on my way to her place, so I shrug it off.

By the time I arrived (20 minute drive), I had 5 ims from this guy, saying that up until 3 weeks ago, they had been dating, and how he broke up with her after he found some very important information. I ask what the information is, and all he tells me is to find a way to check her bedroom nightstand.

When I meet her, she is a stunning girl, very flirty and friendly, which I like. We settle in to watch a movie (some chick flick). We both know I am simply humoring her taste in films, and that in return she is testing me to see what I’ll put up with in order to get laid. I would say within 30 minutes into the movie we are making out, pretty heavily, and she suggests a move to the bedroom. I figure this is my chance to find out if there even IS this ‘important information.’

I smoothly tell her that I love how a woman looks fresh out of the shower, hair soaking, wearing nothing but a towel. She accepts my not-so-obvious hinting immediately, running to her bathroom. I scramble to her nightstand, open it up and see papers. As I rifle through them, I see a small handful of STD tests. Initially I think, ‘hey, shes conscientious of her and her partner’s health, good on her!’

Till I see that 3 of the 5 are dated in the last TWELVE months, and in her name. One of the three is negative for everything, but also the oldest. Uhoh.

Second one? 6 months ago, and positive for Trichomoniasis, and looking further into the drawer, I find the appropriate antibiotic bottle. Empty. Good, at least its gone.

What did I do? Grabbed my shirt, jeans, and waved to her on my way out, as she left the washroom excitedly.

Moral of the story: Have the STD talk with a partner before committing to any sexing. Even if it’s just casual.