If you believe compatibility is based on similar facial features, this is the site for you. 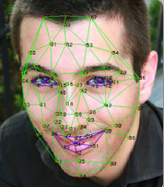 It’s funny that I talk about first impressions in my reviews, because the first impression I got from FindYourFaceMate is definitely one of the funniest and least enticing first impressions of any of the online dating websites I have evaluated. Now, I’m not one to judge other people’s looks or other people’s taste in music because beauty is in the eye of the beholder, and music tastes are completely subjective. However, when I go onto FindYourFaceMate’s homepage and am immediately locked eye-to-eye with a very stoic looking Garth Brooks and his wife, something just feels off.

See what I mean? It’s like he’s looking right into my soul, and daring me to follow him down Thunder Road. That said, I was very intrigued by this dating site’s innovative take on finding matches for its members. Instead of relying on silly things like common interests or compatible personalities, this website feels that the most important thing that a potential couple should share is facial features. Let me repeat that for you in case you’re unsure what I’m saying. This site’s entire matchmaking process revolves around bringing people together because they look alike.

Suffice to say, I was sceptical.

I should say, their site claims that there is plenty of scientific evidence that people tend to find people who look like themselves more attractive. And, according to the site, when someone “meets their facial feature match, the neurological response in the brain triggers a release of endorphins and other mood enhancing chemicals” that makes connection more likely. Of course, they never footnote any actual scientific study or paper, yet they maintain that “scientists offer compelling data on romantic chemistry and findings prove that passion is subconsciously ignited when we spot someone whose facial features are similar to our own.” Personally, I don’t think that I look anything like thousands of women I find incredibly attractive, but apparently I’m fooling myself.

Reading through their site’s information as I set up me membership, I found out that the reason this hole site got going was because its founder, Christina Bloom, noticed that her friends and family kept remarking that both she and her boyfriend looked alike. One wonders what would have happened if she had been dating someone who looked completely different than she would. But I digress.

I assume that they deal with a lot of scepticism over there at FindYourFaceMate, so all over their sign-up process pages there are links to “legit” “news” shows like Good Morning America and Inside Edition (ha!) to prove their claims. Seeing them show a few pics of couples that prove their point did not make me forget the other 95% of couples I have seen throughout my life that had absolutely no facial similarities what so ever.

However, since it is free (and I think we all know why it’s free – because no one in their right mind would pay for this matchmaking scheme when there are actual, legit sites out there matching people based on legitimate compatibility), and boasts a membership of tens of thousands of people, I decided to throw my hat (and face) in the ring. After all, stranger things have brought soul-mates together, right?

Free for now. Although they seem to allude to that being a temporary price. In their words, “Because we want to build our “face base” (data base of member photos) in order to offer all of our members across the country the most and best possible face matches, we are currently offering free charter memberships to FindYourFaceMateÂ®. If you join now, your membership will be free for life, or until you find that perfect match.”

The biggest pro going for this site is its cost. After signing up and uploading a picture of myself I waited for a full day before they got back to me. I guess it takes that much time for them to read all 67 facial points and compare them to their database. They started sending me the profiles of the girls that they felt looked like me, and that when I could begin vetting them for actual compatibility. At that point, the regular emailing/setting up dates process that you get at other websites kicked in.

Well, after going through their facial matching system, the matches they sent to may did look a lot like me, but here’s the problem. I’m not attracted to women that look like me. So, I had to go through all these look a likes to try to find ones that weren’t too much like me. After that, I had to go through their profiles and figure out if I would be compatible with them. I’d say out of the 50 women they suggested for me, I found 20 attractive. Of those 20, only 7 did I want to try going out on a first date with. After emailing those 7, only four found me attractive and interesting enough to agree to a first date. And of those four, I’ll only see two again. Those are just terrible numbers, in terms of online dating. The reason meeting people through dating websites is so effective is because it casts such a wide net, but that’s just not the case with FindYourFaceMate.

I’m all for new dating sites trying new ways to connect people. The fact that some couples look alike and scientific data has some research claiming that resembling a potential partner increases attraction does not change the fact that compatibility does not begin and end with resemblance. The site is free at the moment, however, so I suppose if you’ve got time to kill and you don’t want to use a legit dating site to try to find someone with common interests or a compatible personality, this could be an interesting distraction.

However, if you’re actually interested in meeting new people for potential relationships, I recommend avoiding this site. Besides which, there is just something very porno-movie title-ish about the name FindYourFaceMate. Or maybe I’ve just got a dirty mind. Or maybe both.