An over-priced and under-membered site that assumes you're traveling by air at least once a week.

I myself couldn’t use this site effectively, since I don’t fly anywhere except on vacation, and that’s usually to somewhere hot and tropical, where I usually have dates set up for me in advance. So, I asked my platonic girl friend Lisa if she wouldn’t mind trying this site out for me, and reviewing it for my site. She agreed, once I tld her I’d pick up any costs associated with the memberships. She’s always on the lookout for a man, anyway, so I don’t think it took much convincing. Anywho, everything after this sentence is from Lisa’s mind and experience:

Hi everyone, my name is Lisa and I am happy to help out my buddy Justin in his quest to try and review all the online dating sites out there so that you and I and the whole world will know which ones are good and which ones to avoid. I’ve had my share of bad experiences with dating sites in the past, so I always find Justin’s insights and evaluations very helpful. After all, anyone who has tried a bad dating site knows it can be expensive and frustrating to no end! I am an executive at an advertising agency and it’s my job to fly around a lot to meet potential clients, and keep existing clients happy. I’ve often thought that I spent more time in airports than in my local singles scene, so this site made sense to me. Plus, there are always such hot guys in airports, to know that one of them is there to spend some time with me in between fights piqued my interest! 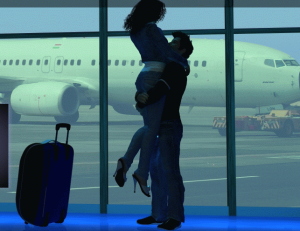 The profile I had to fill in as soon as I went to the site was pretty basic. I figured it wold be like most dating sites and need about twenty minutes of details to find matches, but this one was really simple. In fact, I was worried that since it was so simple that the match making system they had was no good, but I was still willing to give it a try. They ask which airport is nearest to your home, and which ones you’ll be using so they can find other members and match you up. I liked the look of the site because it was well designed and obviously they had put some thought behind it. I put up a few pictures of myself and started looking around.

Almost straight away I started getting emails from guys. For me to read and respond, though I had to upgrade to one of the paid memberships they offer. Since Justin offered to pay, I agreed to the paid membership right away. Here are the prices, and I chose the one month option:

Over the month I used the site, I was probably contacted by about 80 guys. The nice thing is that while on a flight I could arrange to meet a guyÂ  when I landed or vice versa. I ended up having drinks or dinner or whatever with about thirteen men over the month. The tricky thing about this match making is that not only do you have to find someone that will be in the same airport as you at the same time, but you also have to be somewhat attracted to their personality and appearance. There were plenty of guys who wanted to meet up, but I wasn’t attracted to them, so it didn’t work. Having all the tumblers click at the right time was tricky, but when it worked out, it was nice. Much better than wolfing down a cinnabon and reading a trashy novel in the waiting area.

Of the thirteen dates I had, I’d say that four of the guys and I hit it off. I think that a lot of the other guys thought that I was there for a sex hook up. The site sort of toes that line that some online dating sites do, where it’s sort of a dating site, and sort of a sex dating site. I definitely get the sense that a lot of people use this to have casual sex while they’re away from home and their significant others. I was looking for guys to actually date, so it was a little harder for me to find what I was looking for.

The main problem with this site is that the dates are so hard to arrange. Your flight and theirs has to line up just right so you have the time to check in, and then get dinner or whatever. A lot of the dates I had seemed forced and rushed. Plus, like I said, a lot of guys were expecting casual sex. This site is owned by the same guy who registered 7ormore (for women looking for well endowed men) and sugardaddies (for women looking for rich guys), so it’s not surprising that so many members were what you’d call shallow.

I didn’t like the site. At first I thought it would be perfect for me since I do so much travelling, but it turned out to be a complete bust. I did meet two really nice, cute men, but since they were just at the airport to do some business and then take off, it’s not like anything substantial could come out of it. A second date was unlikely. In other words, I do not recommend this site.